Milan, Bergamo and Lake Maggiore – the Bed and Breakfast Way

I have a formula for visiting Italy. Stay a few nights in a city (Rome, Florence, Venice, Bologna). Unique but similar: lots of history, architecturally interesting and steeped in art – paintings, statues or both. Add a few nights in a smaller town (Verona, Siena, Sorrento). It doesn’t seem to matter which one, they all possess beautifully designed churches, piazzas, bridges and scenic viewpoints. Finish with several nights in an area of outstanding natural beauty (the Amalfi coast, Lake Como, Lake Garda). The scenery is invariably stunning, the villas and their gardens outstanding and the mountains, coasts and lake shores inviting, ready to be walked at every available opportunity.

Add to this an agreeable climate, wonderful food and an excellent public transport system with frequent and reliable buses and trains and the formula is almost complete.

The only thing missing is the accommodation; where to stay? Over the last few years I have developed an aversion to large hotels. They’re all the same and it doesn’t matter if you’re in London or Lisbon, New Delhi or New York, it’s likely you’ll hardly notice the difference (in the hotel that is!).

To get round this, my preference is to stay in bed and breakfast accommodation. Steady on, that’s a step too far, readers of my generation will say, their opinions formed by an outdated view of post-war “seaside landladies”, where bathrooms were shared and the landlady requested that you were out during the day, regardless of the weather.

But the modern reality is that bed and breakfasts are a far cry from this image. Consider the advantages: they are generally cheaper than hotels and you can get to talk to the real residents of a place, learn about their lives, get their restaurant and other recommendations and maybe meet other guests and exchange ideas with them too. As regards standards, you can usually “see” the accommodation on the internet. Any self-respecting bed and breakfast has set up its own website by now. 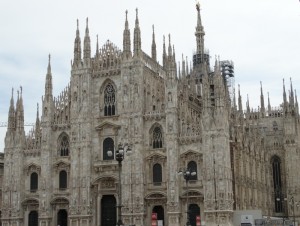 So, with a plan in place, we flew to Milan for the city element of the trip. We stayed in “Bronzino House”, a small B and B, inherited from his parents by Walter, another resident in the 1920s apartment block. The B and B apartment consisted of two en-suite bedrooms, both beautifully restored and decorated, a small kitchenette and breakfast area, and a sizeable veranda, with frequent visits from Walter and his wife Evelina, to prepare our substantial breakfasts, discuss our plans or to recommend and book restaurants.

On the first night Walter booked us into a typical Italian restaurant, “Il Trullo”, about 10 minutes walk away. As Bronzino house is around 15 minutes walk from the nearest metro station and the city centre 20 metro-minutes away, it follows that the nearby restaurants are for locals rather than tourists. So the food is not only cheaper but better, as the restaurants in this area are catering for repeat business and not passing trade. The mozzarella stuffed with butter and cream was delicious, if a tad fattening, and the pasta with tomatoes and walnuts and a parmesan and rocket salad very tasty.

The following night was a Saturday and the restaurants were full to bursting with Milanese. We tried another of Walter’s recommendations but had been too late to secure a booking. So “K2” was already full. Luckily, the head waiter at Il Trullo, just around the corner, recognised us as “regulars” (ha!) and squeezed us in for a repeat performance, with different but equally appetising food. (An excellent swordfish steak on my part.) We knew we’d been accepted when he remembered our choice from the night before and gave us a liqueur “on the house” to finish things off.

The primary purpose of visiting Milan was not to visit the designer shopping area, nor to see a performance at La Scala opera house, both way too expensive, but to see Leonardo’s “Last Supper”, one of the world’s most famous paintings. The Last Supper is painted directly onto one wall of the refectory of the Chiesa di Santa Maria delle Grazie and is NOT, as you might expect, in Milan’s huge Duomo. It’s not easy to see: you have to book well in advance and can only see it for 15 minutes as one of a group of 30. If you attempt to photograph it, you will be quickly stopped. The cost is around €8. You could pay a lot more to get a guided tour but you’d still only get 15 minutes.

Hence we were at the Chiesa at 8.30 am and had lots of time remaining to visit the Duomo, the Basilica di Sant ‘Ambrogio, the Giardini Publicci , the Navigli (Milan’s restored and very touristy canal area) and the Castello Sforzesco. Actually, we had visited the Castello the day before, Friday, when it is free to visit Milan’s ancient castle. All of these places had been recommended by Walter and although we may have visited them anyway, it was useful to get a local’s opinion.

Once we had seen Milan. We headed for the central railway station for the 50 minute, €7 train ride to Bergamo. Luckily for us, the taxi driver volunteered to take us to Bergamo for the same price as the train fare and as the journey is only 30 minutes by car, we arrived at the same time as we would have been catching the train.

We headed for our B and B, La Casa Di Campagna which is 2.5 km from the centre of Bergamo old town, in the Parco Dei Colli (the Park of the Hills). Bergamo itself consists of the walled old town, on top of a hill and the surrounding newer town. The two parts of the town are connected by a funicular, if you don’t fancy the steep uphill walk. The 2300 hectare park was established in 1977 to protect the habitats surrounding Bergamo and its village satellites. There are numerous walking and cycling trails in the park. The B and B is a restored 19th Century farmhouse, owned and run by mother and daughter, Laura and Miriam. It has a large kitchen/dining area, two en-suite rooms and another two rooms suitable for a family group, with a large shared bathroom. We had booked the two en-suite rooms.

Miriam greeted us on arrival and gave us a map and low-down on the area, with enough restaurant recommendations to last our three night stay. On the first night we took up one of these, about a 20 minute uphill walk away, the Trattoria Parietti. We had reserved a table for 8pm and by 8.30 the trattoria was full. As it’s on a lonely road, two kilometres out of Bergamo, it’s safe to say that few of the diners were tourists. We shared food: a bowl of mussels, salad, penne, gnocchi with chestnuts and apple, chips, four slices of delicious tiramisu, a litre of very palatable house red. Excellent food: total cost just €73 between four.

On Sunday, Bergamo was heaving with day-trippers from nearby Milan. Unfortunately for us, this meant that on Monday, many of the museums, churches and towers were closed, as the locals took a breather from their busy weekend. But this didn’t stop us from walking the park route into the city, three kilometres uphill, enjoying the views of the lovely villages and churches surrounding Bergamo the whole way. This route arrived at the fortress, which overlooks both the old and new cities. The rest of the day was spent exploring the narrow streets and hidden stairways through both the old and new cities.

By the second and third nights we were getting a bit pasta-full, so we asked Laura if we could prepare our own food and eat in. Of course, said Laura, and told us where we could buy ham, cheese, fruit and so on. By the time we came to eat, Laura had set a table, with water and bread provided, and had recommended some very reasonably priced local wines, which she had available.

When we had finished our stay, we were given a complimentary lift to the station. To return to Milan to connect with the fast train for a 50 minute ride to Stresa, on the western shore of Lake Maggiore, Italy’s second largest lake.

We were due to stay at La Casa Del Giardiniere, a bed and breakfast owned by Brighouse exile David, and Penny, his Yorkshire-born but naturalised Italian wife, in the village of Stropino, a steeply uphill seven kilometres from Stresa. The first issue was to actually get there.

A taxi from Stresa railway station? “Don’t,” said David. “I’ll pick you up, bring your luggage up, and then collect you five hours later. You can then spend the afternoon looking round the town and eating on the lakeside. Need some restaurants? I’ll take you there and then ask the waiter to ring me when you’ve finished.”

“There are lovely views over five lakes and the Alps from the top of 1491m high Monte Mottarone but don’t take the cable car, it’s too expensive. I’ll take you in the car and bring you back in a round trip via Lake Orta, where you can stop in the lovely lakeside town for a couple of hours while I visit a friend for coffee.”

“Want to use the lake ferry? I’ll drop you in town and pick you up later…”

And so we did all of these things. The round trip to Locarno on the train, through the snow-capped peaks of Italy and Switzerland, past little villages in alpine meadows, via tumbling rivers and occasional waterfalls, and then back to Stresa on the lake steamer, is incredible value for €32. The only drawback was that inevitably lunch is taken in Locarno, where Swiss prices are twice that of Italy. A simple bottle of water cost 7.5 Swiss Francs and no matter how many times we tried to do a double calculation of Swiss Francs to Euros and Euros to Pounds, it always came out at almost £6 a bottle. No wonder the Swiss cross the border to do their supermarket shop in Italy!

Buy a two day ticket for €10 extra and this buys unlimited hop on, hop off access to the lake ferry, to the isolated monastery of Santa Catarina del Sasso, hewn into the cliff side, to Villa Taranto and its landscaped and beautiful gardens, to the Borromean islands, Isola Bella and Isola Madre, with their own villas and gardens overlooking the lake.

David has lived here for 10 years and so has a detailed knowledge of the area and its restaurants and, needless to say, his recommendations were superb. Next door is Al Sciucc di Stropino, a small family run restaurant rapidly gaining an enthusiastic local following. And quite rightly so… the pasta is up there with the best in Italy, the ravioli stuffed with cheese and sage simply divine. Another which caught our imagination was a second family-run restaurant in the nearby village of Gignese, “La Cascinetta da Luisa”, where the innovative menu included risotto with gorgonzola and coffee and swordfish with poppy seed and date and ginger sauce. I wanted to go back 30 times and try the whole menu! And being village restaurants run by Italians for Italians, they don’t cost the earth. Three courses plus wine at Al Sciucc cost about €50 per couple. In Venice you’d pay double this and then some.

We paid David for petrol, of course, but the rooms were only €75 per night, including a delicious and substantial breakfast of cereals, fruit salad, marmalade-filled croissants, breads and jams, home made cakes and coffee and so the total bill could not really recompense David for his time and unbelievable hospitality.

Will we return to Italy?
Of course.

Would we return to this area?
Absolutely.

Would we stay in hotels?
What with the bed and breakfasts providing restaurant recommendations, tables laid for dinner and a personalised taxi service, tour guide and new friends… not a chance!

£5 OFF FOR NEW MEMBERS